PROTECT: Following are the pitfalls of improper grease disposal and how Trap-Eze Tabs protects.

Foul and obnoxious odors from grease are unpleasant and damaging to business. The aerobic active oxygen of Trap-Eze Tabs captures and neutralizes the odor.

No Surfactants in Trap-Eze Tabs

Grease buildup can cause sewage system failure or backup requiring the business to close. Trap-Eze Tabs ends the threat by eliminating grease buildup.

Competitive enzyme products only emulsify or liquefy the grease, while Trap-Eze Tabs digest and eat grease turning it into carbon dioxide and water. Municipal fines & penalties occur from discharging oil & grease (O & G) into wastewater systems. Use of Trap-Eze Tabs eliminates this risk.

*Over time sludge may have to be pumped.

Trap-Eze Tabs oxygenate the water utilizing a revolutionary oxygen delivery system in the form of a time release tablet. Once submerged in wastewater, Trap-Eze Tabs begin to effervesce into micro fine oxygen bubbles. This fizzing action distributes the bacteria, oxygen, and buffers evenly through the environment while treating the bottom sediments.

Unlike other liquids or powders which are often quickly discharged due to flow through, Trap-Eze Tabs active ingredients will actually adhere to the equipment, piping and trap surfaces, starting at the bottom. This unique bottom-up distribution means Trap-Eze Tabs will be a very effective treatment. 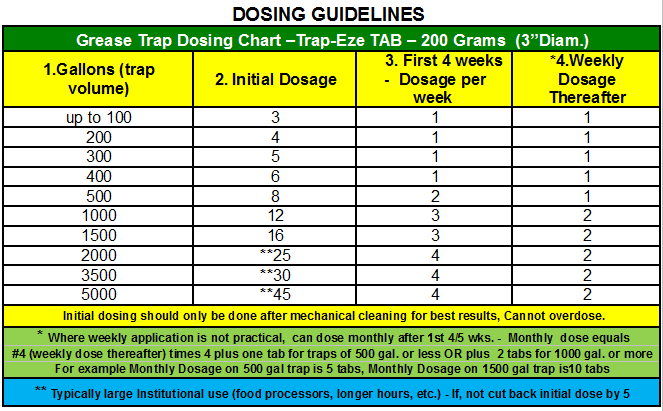 Floor Drains – During normal course of operation, some food particles and grease can fall into the floor drains along with some water accumulations. As a result they often attract fruit flies. This often will result in significant noxious odors. Trap-Eze Mini-Tabs will clean, control the odors and aerobically break down the FOG and solid accumulations.

Works from the bottom up

Subscribe to News and Updates
Thanks for your subscription to our newsletter!